The Bryant Park in New York 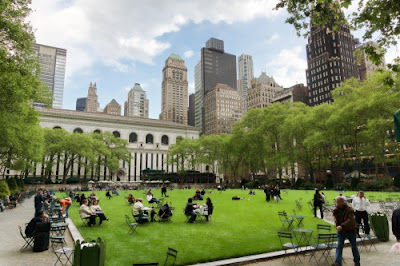 The Bryant Park, consisting of nearly four acres, is located in the heart of Midtown Manhattan.
In the heart of most important business district of New York, the rectangular park annually hosts various events relevant to the inhabitants of the city: the Bryant Park Fi
lm Festival, held annually in June; The Fashion Week , which takes place the second week of Septemberwith the big rink being built in the park in late October, and the introduction of apretty market town every Christmas.
This park was first opened in 1843 under the name of Reservoir Park and along the years have incorporated various monuments, sculptures and fountains such as the example of the New York Public Library, established in 1899 or Josephine Lowell Saw Memorial Fountain, designed in 1912 by Charles Adams Platt.
Bryant Park in 2002 became the first wireless city park because it offered free Internet access via Wi-Fi.
Also this park has been awarded numerous awards including the 2010 Silver Spark Design Award in November 2010 and the Great Places in America: Public Spaces, received in October 2010 by the American Planning Association, or the Reggie Award-Gold by Promotion Marketing Association.
The Bryant Park is located behind the New York Public Library in downtown Manhattan, between 40 and 42 streets and Fifth and Sixth avenues.
Their schedules are:
- 7:00 to midnight in January and February
- 7:00 to 20:00 March
- 7:00 to 21:00 April to October
- from 7:00 to 22:00 in November and December
Enviar por correo electrónicoEscribe un blogCompartir con TwitterCompartir con FacebookCompartir en Pinterest
Temas: EEUU, New York, Nueva York, Turismo