Cathedral of St. John the Divine, in New York

An American icon for religious tourism is the Cathedral of St. John the Divine in New York City. It is located on Amsterdam Avenue 112 Street, within walking distance of Broadway and has very good connections by underground (lines 1 and 9) or bus (lines M4, M104, or line 11). 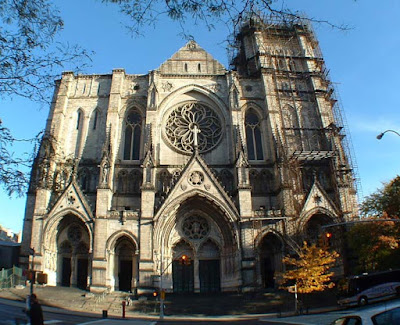 This great architectural building is the largest in the world, and the fourth largest Christian church in amplitude. While it is known for its neo-Gothic style, over the years has undergone many stylistic changes, the last in January 2005, in fact, at first thought of a Byzantine-style building or Romanesque but finally decided French Gothic style.
Reconstructions and changes that characterize were caused more by the two world wars. Thus, each reconstruction was followed by a restoration.
Its construction began in 1892 to be previously designed in 1888 by the architects Heins and La Farge, and is commonly called the Cathedral of San Juan, incomplete or endless, because more than one hundred years after the work has not been completed.
The cathedral contains an impressive portico called "The Gate of Paradise"and a rosette made ??more than 10,000 pieces of colored glass, the largest being the United States.
Among its highlights chapels called Labour Chapel, where the FDNY memorial, a tribute to 343 firefighters who gave their lives tosave others in the disaster of September 11, 2001.
Enviar por correo electrónicoEscribe un blogCompartir con TwitterCompartir con FacebookCompartir en Pinterest
Temas: EEUU, New York, Nueva York, Turismo