The Zero Zone in New York

As important as the Empire State Building, Central Park or the Statue of Liberty, is a visit to Zero Zone in New York.

Until 2001, there were the famous Twin Towers, whose structure was designed by Minoru Yamasaki and Emery Roth. Had a dual structure in the coexistence of two tall buildings. His height was 417 and 415 meters and a width of 63, 5 meters. The World Trade Center housed 40,000 people who worked there and some 15,000 people a day visiting the area. 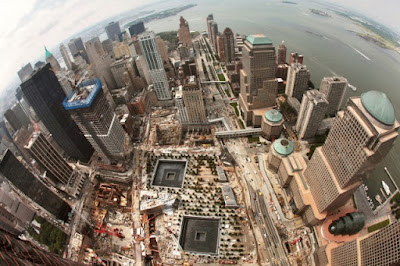 Since the terrorist attacks of September 11, 2001, the area has become a center of pilgrimage for tourists who come to try to understand what is being lived in Manhattan that day.
After the tragedy, it was decided to install two ramps in which thousands of people laid flowers, candles and all their hopes in finding their relatives and loved ones.
Today, these ramps are gone, but were established information panels that narrate the events.
The attack destroyed a total of seven buildings, which had to be completely demolished. Today, in nearby St. Paul's Chapel are many artifacts and memorabilia from those days, photographs, banners, drawings, notes of grief, helplessness and support ...
But in a city where the spirit never flags, the plans have not been suspended. Rebuilding the lives of those affected and the city of New York is already underway.
Enviar por correo electrónicoEscribe un blogCompartir con TwitterCompartir con FacebookCompartir en Pinterest
Temas: EEUU, New York, Nueva York, Turismo