Parks is one of the most active and lively city of New York. In the heart and center of Greenwich Village, this park is surrounded by New York University. His beginnings as open space were the establishment of a cemetery, instead of running after and finally from 1820, a public park. 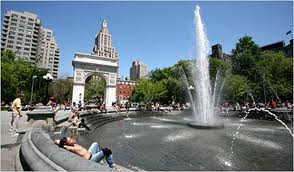 In the northern part of the park we find the Washington Arch, a bow inspired by Roman triumphal arches. This structure was built in 1889 to celebrate the centenary of the rise of George Washington.
It replaced Decorated with sculptures of Washington in its two civilian and military attire Alexander Stirling Calder and Herman MacNeil, this arch became the symbol of a new United States dedicated to the arts.an arc surrounding the area, which was a temporary structure of wood and stucco. Even after winning popular approval, the original design of McKim Mead & White was rebuilt in marble in 1891.
Inside the park is the statue of Garibaldi, who lived in New York in exile in early 1850. The statue was built by Italian immigrants who began settling the area south of the Plaza in the early 1800's.