The restaurant chain Hard Rock Cafe was founded in 1971 by Isaac Tigrett entrepreneurs, born in Tennessee and also dedicated to family business, and Peter Morton.

Establishments that make the company stand out from any other because of its subject rocanrrollesca. Each and every one of them are decorated with objects from artists and rock bands like guitars, drums, posters, shirts, ect., And while serving typical food from the United States, several televisions offer video clips of the bands belonging to the genus. 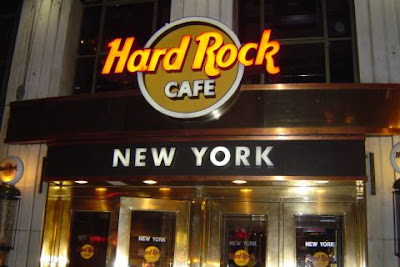 The first Hard Rock Café opened in London at Hyde Park Corner in 1970 and, eight years later, in 1978 opened a second location in Toronto.
However, not until 1982 when it began global expansion of this restaurant chain, opening branches throughout Europe, North America, Latin America, Asia, Australia, the Caribbean and some African countries.
In addition, the company's expansion is not limited to restaurants, but have developed around the world shops, hotels, casinos, and even a theme park in South Carolina, Hard Rock Park, which opened April 15 2008 with a performance of "The Eagles".
Located in the heart of the city in the heart of Times Square, the Hard Rock Cafe in New York contains pieces of rock legends like The Beatles, Led Zeppelin, Nirvana, Billy Joel, The Ramones and Elvis Presley on the walls to over coffee. Incluyelementos also contemporary, as some stage costumes worn by Madonna and Gwen Stefani.
Service Times Square also includes objects of rock 'n' roll incomparable collection of Hard Rock, including artists with ties to New York, as John Lennon, Jimi Hendrix, The Ramones and Bruce Springsteen.